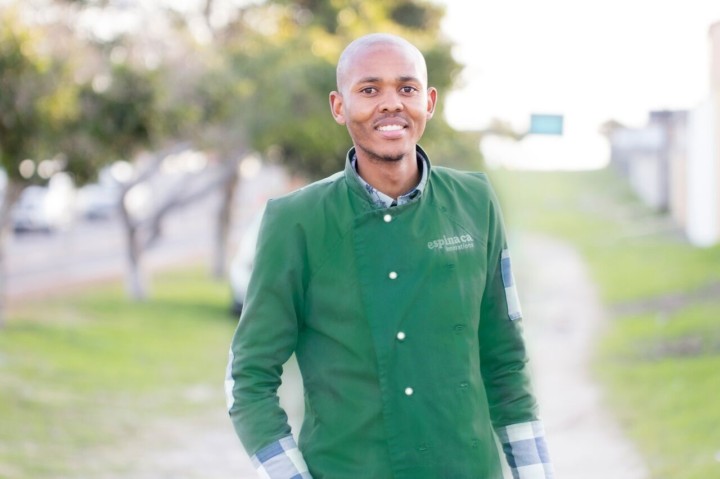 Lufefe Nomjana adores spinach; in fact he loves it so much that he named his company Espinaca (Spanish for Spinach) Innovations. His story speaks of tenacity, adaptability and good old fashioned hard work.

His mother to this day serves as his role model. She singlehandedly raised him and his two brothers whilst holding down various jobs. His career has been diverse too. His love for spinach started whilst simultaneously volunteering in a community garden and at a community Health Clinic.

This combination taught him a great deal. It is here that the proverbial seed was planted so to speak. He worked closely with a dietician and had to explain eating plans to the locals. He learned a great deal. Soon he was talking the talk of GI’s and substituting white bread in your diet. This resonated with him, as it was during this time that he started experimenting with baking spinach bread. No mean feat as he had no idea of how to bake or the facilities to do so.

He spent time at the library, as he had no computer or internet access at home. Books and Google became his allies, his best friends. He researched how to bake the best bread in the world. His time, energy and resilience paid off, books and Google also provided him with the following 3 catch phrases, which he took to heart.

“Look around for resources”

“Success comes and is inevitable when you assist others.”

“The value of asking is amazing.”

He did look around; his next door neighbour had a kitchen with an oven. She agreed for him to use it in the evening on the condition he is finished by early morning. His capital at the time was a measly R40. He would bake 4 loaves of bread for door-to-door selling.  One loaf would be for sampling and the other three for selling.

He admits his first loaf wasn’t very good. His library visits continued. It took him more than a year to develop the bread recipe he was happy with –“A low-GI spinach bread, where instead of using white sugar we used brown sugar or honey and substituted flour with pea or soya flour-which gives it a reduced carbohydrate content.”

He identified the problem in the community at that time as-“unhealthy eating and overall lifestyle, leading to unhealthy activity.” Culturally (here) to eat is seen as being healthy not what you eat at all.   He survived on the spinach and the crops that they grew in the garden. He only ate vegetables and became vegetarian — an environmental conscious lifestyle he still follows today.

The demand for the bread and his reputation in the area began to grow –“like the leaves in the garden” he tended. He became known as Khayelitsha’s Spinach King.  (Khayelitsha is an informal settlement outside of Cape Town.) He was busy giving back to his community and pronto success came knocking on the door.

Yes you guessed it, “the value of asking” followed. Lufefe approached Spar (a South African retailer); he asked to use their ovens in exchange for a supply of his loaves. His capacity to produce increased dramatically, it reminds of the parable of the 5 loaves and 2 fishes.

They let him sell the bread in their store, rent-free for the following year. This enabled him to save enough to buy equipment and bicycles (for delivery). He also successfully raised funds via the Thundafund Crowd funding platform and successfully graduated from the Raymond Ackerman Academy in Entrepreneurship Development.

He goes on to win the SAB (business) Innovation Award in 2014. He utilized the prize money to open his first “green” bakery. This is an express bakery where they bake and sell.

The same year Forbes Magazine lists the Spinach King as one of the upcoming, innovative concepts in Africa. This was his year; it was when he attended the Discovery Vitality Summit that his path crossed with Ross Faragher-Thomas, MD of Sir Richard Branson’s Virgin Active Group.

The Cafe is for baking, selling and has three tables outside with space for several more. It is made out of two large green- painted shipping containers. Spinach grows on wooden shelves along the outside wall. The container is Ecco friendly, the first solar based green bakery. The exterior includes an organic garden where Lufefe grows vegetables and herbs used in his products.

The Cafe boast a “Popeye Wrap” and the house speciality is a meatless green burger- a spinach bun with fried vegetables drizzle with a spinach sauce. Another twist is the “Blender Bikes” The bikes are stationary with blenders attached and powered by pedalling. Customers riding the Blender Bikes, will produce their own smoothie of choice – blended the Virgin Active Way.

Blender Bikes to biodegradable bags. Lufefe only use PLA bags. “These bags look like clear plastic bags but are made from renewable plant materials instead of petroleum- based plactis. They do not contain any toxins and their production creates significantly lower greenhouse emissions than those made from conventional plastic.”

“The Espinaca Innovations delivery team deliver bread locally on bicycles. They are selling healthy products, promoting a healthy lifestyle and minimising the carbon footprint of the bakery.”

The next interesting development on the cards is that, Espinaca Innovations, together with the assistance of Cornell University in America, has developed Spinach Chips. A healthy alternative to potato chips, like they say competition is healthy. It is due to be released soon.

His dream is not only to grow a big business, he is starting to do just that, he has already sold a licence to a business in Washington DC in the US and one locally. Espinaca Innovations is going global.  He wants to own something that can serve his community, like a Spinach Farm. “I wish to positively change the eating habits of the people in the township.”

Lufefe Nomjana does Tata Madiba’s statement proud. Nelson Mandela said: “There can be no greater gift than that of giving one’s time and energy to help others without expecting anything in return.”

We would like to say Viva Lufefe, he will simply tell you it is all about community and Viva Espinaca!

Visit www.spinachking.co.za for more information and fun facts on spinach. Lufefe shares his story and views on sustainability in the following link.